Let’s give a Big Welcome to Frankie Bones for joining Jamvana! PLUR! 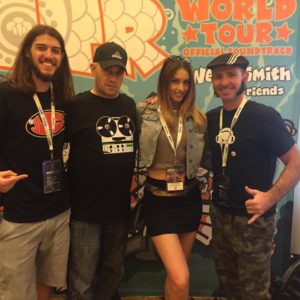 Jamvana is honored to welcome on this legend Frankie Bones to our music group. We met Frankie and Melissa at EDMbiz in Vegas, and we’re so stoked to have them in our booth, snapping pics, very down to earth and just some outstanding nice people with our team, Erica,  Collin and one of our artist/labels  Wes Smith owner of Juice Recordings.   Frankie Bones, one of the founders of the New York and US techno scenes, got his first inspiration from his father’s vast record collection after his father was murdered. Later on, after he had begun producing records, he was offered a gig to play for 5,000 people in England called “Energy” on the strength of his compositions[citation needed]. As the event started on August 26, 1989, the projected attendance had gone through the roof and Frankie played to 25,000 people while the sun came up.

Being profoundly moved by the experience, he brought it back to Brooklyn in the form of his series of Storm Raves. The Storm Raves events began with only a few hundred people in attendance growing to over 5,000 where the likes of Josh Wink, Doc Martin, Sven Väth, The Horrorist, DJ Keoki and Richie Hawtin were able to launch their performances into international careers.

During this period Frankie is credited with being the creator of the Peace, Love, Unity, and Respect (PLUR) ideology. In response to a fight that broke out at one of his epic Storm Raves in New York City, Bones is said to have got on the microphone and yelled: “If you don’t start showing some peace, love, and unity, I’ll break your faces.”

The Berlin Love Parade, which is generally considered to have been the largest techno festival in the world, named its 1991 and 1992 Parades after well-known compositions by Frankie Bones – “The Future is Ours” in 1991 and “My House is Your House (And Your House is Mine)” in 1992.

His brother, Adam X, is also a techno DJ and producer, and their colleague Heather Heart is a DJ and music writer/zine maker who helped create the community for underground techno music in New York and Beyond. Frankie Bones, Adam X, Heather Heart and others are associated with the record label Sonic Groove. He co-owned, with Adam and Heather, a record store with the same name as his label at 41 Carmine St in New York City, where it had relocated to from a Brooklyn location in 1995. The shop closed in 2004. Today Frankie is gearing up with a whole new catalog of new tunes and we can’t wait for what we have in store for his fans. The Bones is here!

Tristam's Before We Fall is Big and Robust

How to Change Your Artist Image on Spotify